Complete the form below to receive the latest headlines and analysts' recommendations for Varex Imaging with our free daily email newsletter:

Brokerages predict that Varex Imaging Corp (NASDAQ:VREX) will post $161.55 million in sales for the current quarter, according to Zacks. Three analysts have provided estimates for Varex Imaging’s earnings. The lowest sales estimate is $159.54 million and the highest is $162.60 million. Varex Imaging reported sales of $202.40 million during the same quarter last year, which would suggest a negative year over year growth rate of 20.2%. The business is expected to issue its next earnings report on Tuesday, November 10th.

On average, analysts expect that Varex Imaging will report full year sales of $729.85 million for the current year, with estimates ranging from $727.84 million to $730.90 million. For the next fiscal year, analysts anticipate that the company will post sales of $717.22 million, with estimates ranging from $706.80 million to $736.10 million. Zacks’ sales averages are a mean average based on a survey of research analysts that follow Varex Imaging.

Varex Imaging (NASDAQ:VREX) last released its quarterly earnings data on Wednesday, August 12th. The company reported ($0.20) EPS for the quarter, missing the consensus estimate of ($0.01) by ($0.19). Varex Imaging had a negative net margin of 2.89% and a positive return on equity of 4.93%. The business had revenue of $171.20 million for the quarter, compared to analysts’ expectations of $172.52 million.

In other news, CAO Kevin Bruce Yankton sold 1,629 shares of the firm’s stock in a transaction dated Monday, July 20th. The stock was sold at an average price of $16.34, for a total value of $26,617.86. The transaction was disclosed in a filing with the SEC, which is available at the SEC website. 3.30% of the stock is owned by company insiders.

Further Reading: What is the Coverage Ratio? 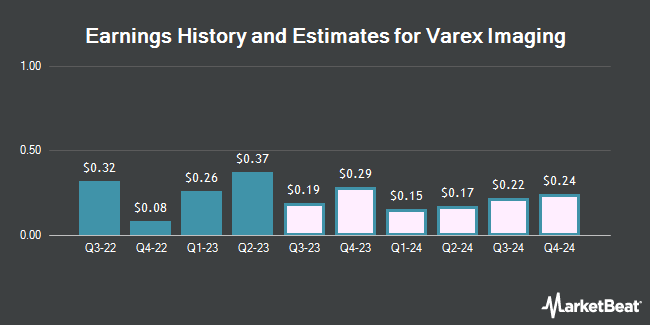