Daily Ratings and News for HUYA

Complete the form below to receive the latest headlines and analysts' recommendations for HUYA with our free daily email newsletter:

HUYA (NYSE:HUYA) was upgraded by research analysts at Goldman Sachs Group from a “neutral” rating to a “buy” rating in a research note issued on Thursday, The Fly reports. The firm presently has a $21.00 price objective on the stock, down from their prior price objective of $22.00. Goldman Sachs Group’s target price would indicate a potential upside of 25.52% from the stock’s current price.

HUYA (NYSE:HUYA) last posted its quarterly earnings results on Monday, March 16th. The company reported $1.02 EPS for the quarter, topping the Zacks’ consensus estimate of $0.08 by $0.94. The business had revenue of $2.47 billion during the quarter, compared to the consensus estimate of $2.40 billion. HUYA had a return on equity of 6.03% and a net margin of 5.58%. The company’s revenue for the quarter was up 64.0% compared to the same quarter last year. During the same period last year, the firm earned $0.76 earnings per share. Sell-side analysts anticipate that HUYA will post 0.55 EPS for the current fiscal year.

HUYA Inc, through its subsidiaries, operates game live streaming platforms in the People's Republic of China. Its platforms enable broadcasters and viewers to interact during live streaming. The company also provides advertising and online game-related services. As of December 31, 2017, its live streaming content covered approximately 2,600 games, including mobile, PC, and console games.

Featured Story: What are some reasons analysts would give stocks a buy rating? 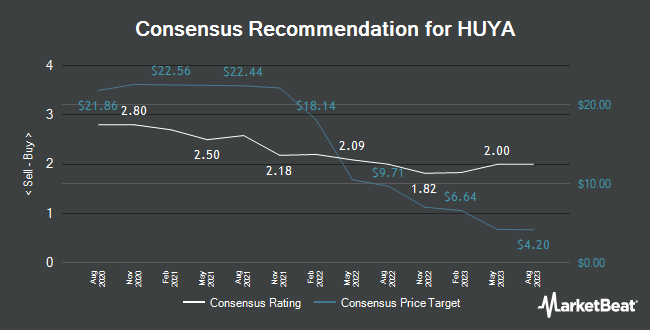 Receive News & Ratings for HUYA Daily - Enter your email address below to receive a concise daily summary of the latest news and analysts' ratings for HUYA and related companies with MarketBeat.com's FREE daily email newsletter.