Daily Ratings and News for FireEye

Complete the form below to receive the latest headlines and analysts' recommendations for FireEye with our free daily email newsletter:

BidaskClub upgraded shares of FireEye (NASDAQ:FEYE) from a sell rating to a hold rating in a research report sent to investors on Saturday morning, BidAskClub reports.

FireEye (NASDAQ:FEYE) last released its earnings results on Tuesday, October 29th. The information security company reported $0.02 earnings per share for the quarter, beating the Thomson Reuters’ consensus estimate of $0.01 by $0.01. FireEye had a negative net margin of 29.44% and a negative return on equity of 20.06%. The business had revenue of $225.91 million during the quarter, compared to analysts’ expectations of $220.09 million. During the same quarter last year, the company earned $0.06 earnings per share. The firm’s revenue was up 6.7% on a year-over-year basis. Research analysts forecast that FireEye will post -0.62 earnings per share for the current fiscal year.

Featured Story: What sectors are represented in the Nikkei Index? 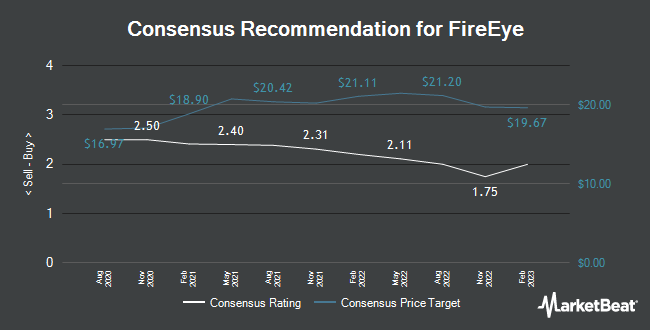 Receive News & Ratings for FireEye Daily - Enter your email address below to receive a concise daily summary of the latest news and analysts' ratings for FireEye and related companies with MarketBeat.com's FREE daily email newsletter.