Complete the form below to receive the latest headlines and analysts' recommendations for Five Prime Therapeutics with our free daily email newsletter:

According to Zacks, analysts expect that Five Prime Therapeutics will report full year sales of $15.04 million for the current financial year, with estimates ranging from $11.70 million to $20.00 million. For the next year, analysts anticipate that the firm will post sales of $33.08 million, with estimates ranging from $20.00 million to $62.30 million. Zacks’ sales averages are a mean average based on a survey of research firms that follow Five Prime Therapeutics.

Five Prime Therapeutics (NASDAQ:FPRX) last released its quarterly earnings data on Wednesday, November 6th. The biotechnology company reported ($1.03) earnings per share for the quarter, missing analysts’ consensus estimates of ($0.95) by ($0.08). The company had revenue of $2.98 million for the quarter, compared to analyst estimates of $4.33 million. Five Prime Therapeutics had a negative net margin of 921.30% and a negative return on equity of 65.39%.

Five Prime Therapeutics, Inc, a clinical-stage biotechnology company, focuses on the discovery and development of innovative protein therapeutics. The company's product candidates comprise Bemarituzumab, an antibody that inhibits fibroblast growth factor receptor 2b, or FGFR2b, which is in Phase III clinical trials to treat patients with gastric or gastroesophageal junction and GEJ cancer; and FPA150, a CD8 T cell checkpoint inhibitor antibody that targets B7-H4 in various cancers, as well as FPT155, a soluble CD80 fusion protein that enhances co-stimulation of T cells through CD28. 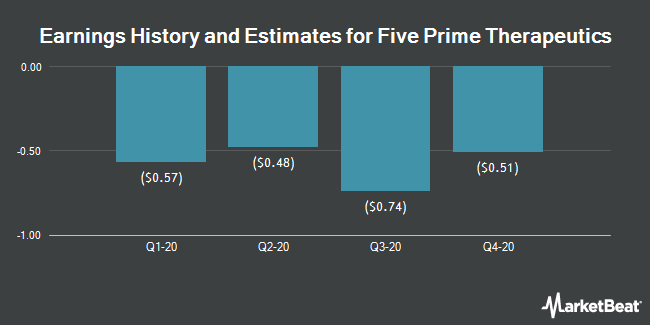